In the beginning there was light,

and this light became life for mankind.

From divine nostrils to feldspar veins

was life breathed, and in the blood contained.

A body mystically woven from magic and mud

Communing with an entire garden of food, air, and

fluid. Taking into itself by some parasitic act of sorcery

the entire physical universe and rewriting it as flesh.

This universe,—breathed into existence from eternity

by a Word; containing within its perfect self that same

Word; containing within its perfect self that very divinity

of which it is consequent—this universe, being the very

Body of God, was given to man as food for life.

But man desired the universe as its own end, its own

reward, and forgot God. Man took the food which

should have been life for him and made it death.

And through the consumption of this death, man took

death into his own flesh and the sickness of sin entered

The once vibrant and life-giving garden became a corpse,

and the stench of this rotting corpse permeated everything,

alleviated only partially in those places where man-as-priest

offered pieces of it back to God to be sterilized. God

blessed these offerings by once more entering into them.

Man-as-priest once more received God by consuming the

flesh of Bulls, and was cleansed by the sprinkling

The stench did not disappear, but festered and

to the smell, and being used to eating dead flesh

he forgot the taste of true food; being acquainted

with starvation, he forgot nourishment; being familiar

with the world, he forgot God, and forgetting God he

forgot also himself. He forgot the magic residing

But God, having once made man in His own image, now

made Himself to be the very fullness of man. Having once

breathed life into a statue of mud, now breathed vitality

into a corpse. Having once formed clay into the being of man,

now formed flesh into the full Being of God. And having

once filled the Holy of Holies with His infinite glory, He now

filled the womb of a young virgin. Through the Holy Spirit of

God and the flesh of Mary, the divine spark of eternal life

This God-Man, in a body mystically woven from Spirit and Flesh,

restored communion with an entire universe of food, air, and fluid.

Taking into Himself through some divine act of sorcery the entire

physical universe, He rewrote it into His Flesh. And in His perfect

Flesh, the physical universe became once more the very Body of

God, no longer dead in sin, but alive in Christ.

He came to save, in His Blood which contains the very Life of God,

and so grants Him immunity from death. In His Blood which washes

away forever the stench of death, and heals permanently the

which He gave to us as true drink, and in His Body, which He

gave to us as true food, we learn anew how to taste; we

remember what satiation feels like; we abandon the world

in remembrance of Him and so doing inherit the world.

In His Blood, and by His Body, we are healed.

From Divine Flesh to hearts of stone was life

received, and by the Blood was known.

In the end there is light, and that

light is the Christ of mankind. 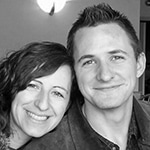 Three Things that Need to Change About Church