This is the third and final installment of Dr. David Brown’s series on the Apostle Andrew. Click here for part 1 and part 2.

What is up with these Orthodox and their bones?  Essentially bones matter, stuff matters, matter matters because of the Incarnation.  When the Pre-Incarnate, Pre-Eternal, Second person of the Holy Trinity was en-fleshed, when the Fully Divine became Fully Man, matter was redeemed and took on the (or begins to take on) the true nature of what it was created to be.

Let me quote from Fr. Stephen Freeman’s blog post on his Glory to God for All Things website, entitled Bones, Bodies and Belief:

The cornerstone teaching of Apostolic Christianity, is that God became man and dwelt among us. He was fully man, flesh and bone, with a human soul. He suffered death and crucifixion. His death was real in every human sense of the word. He descended into Hades, and freed us from our bondage to sin and death. In His resurrection we are raised from the dead. He carried us with Him into the bosom of the Father.

From the earliest days, disciples reverently gathered the remains of martyrs (among other objects), and preserved them carefully. They quickly (and as surely as the bones of Elisha) became objects of honor and devotion. This is perfectly natural and human, and illustrates proper piety and devotion in the light of Holy Scripture. Relics are never worshipped (such a practice is contrary to the canons of the Church). However, they are given the honor that is due them.

That there is a reason to venerate the relics of the holy saints is made clear in Scripture (see 2 Kings 13:21). That the Church continues to do so is simply a testament to the faithfulness of those who received the fullness of Christian Tradition. That the relics of contemporary saints continue to be places where miracles occur is simply a testimony of the faithfulness of God who “never leaves us nor forsakes us.”

The known history of Saint Andrews relics, which include his bones and the cross on which he was crucified, are as follows:

(I smell a pilgrimage tour brewing here.  Who’s in?)

Conclusions on Andrew, the Man

Andrew was a disciple of John the Forerunner, and therefore as such was likely unmarried (virgin) and vegetarian.  He was one of the first Christian ascetics.  He could have been described as uncommon, unique, or even strange.  He placed big stone or iron crosses wherever he went, and carried a large staff with a cross at its top.  He was modest, and did not have a lot of disciples, but only small circles of followers.  He did not preach to large crowds like Peter and Paul, but to small companies, more like a staretz or geronda (think Father Zosima in Dostoevsky’s Brothers Karamozov).  He was humorous, humble, and very easy.  Andrew interacted with philosophers and barbarians alike.  He possessed great practical wisdom.  Humility allowed him to speak to all and interact with all.  The apostle was not an invader or an explorer.  He was one of “them” wherever he was.  He shared experiences with people.  He saw everyone as an icon of Christ.

Humility was one of his strengths.  Although he was the first called disciple and the first missionary/introducer of Christ, because of his modesty he did not step forward with the triad of Peter, James, and John.  He was the first called, but never went first.  He only went first when he had something to ask of God.  As we explored above from Scripture, there are three examples of this:  1) on Holy Thursday, Philip didn’t know what to do with the Greeks, so Andrew took them to Christ and asked him;  2) miracle of the loaves and fish:  he went to the Lord to ask him to do something about the food/hunger problem; and,  3)  Andrew asked the Lord about the signs of the end times.

To travel as extensively as Saint Andrew did, he had to have been a man of physical strength and mental endurance.  I have had the opportunity in my life to do some international travel and have lived outside of my home country for a time as well.  Language acquisition, cultural unfamiliarity, new and unusual foods, unknown environs and unforeseen circumstances, and not having one’s own bed, can all be very daunting and difficult hurdles to overcome.  To overcome these difficulties in as many places and as many times as Andrew did is nothing short of amazing.  Success in accomplishing this would have required a simplicity of needs, low demands, and flexible expectations.  Saint Andrew was not high maintenance for sure.

To shed some light on Andrew’s humble, easy character, I will quote from Fr. Patrick Henry Reardon’s Touchstone (May 2001) article entitled Andrew, The First-Called:

In all of the Gospels, however, there is one scene that seems most clearly to reveal this trait of friendly, relaxed availability in Andrew, and that scene is in John’s narrative of the multiplication of the loaves. Of the six New Testament stories on this theme, only John tells us of the special role of Andrew: “One of his disciples, Andrew, Simon Peter’s brother, said to him, ‘There is a lad here who has five barley loaves and two small fish, but what are they among so many?’” (John 6:8f.).

Now, the attentive reader of Holy Scripture should be asking a question of the text at this point, namely, just how did Andrew know that there was a little boy present who was carrying those particular pieces of food? It is unlikely, after all, that a small boy would be holding all seven items in his hands at the same time. The five barley loaves and two little fish must have been carried in a sack of some sort. The lad was part of a large multitude that had been with Jesus for some days (Matt. 15:32), and his mother had packed him several meals in a lunch bag. By now, he has already eaten most of that food—the fresh fruit and sweets are gone, for instance. All the lad has left in that sack are five barley loaves, possibly a tad beyond their prime, and a couple of salted fish.

So how did Andrew know what was contained in that little boy’s bag? Surely the answer is obvious. He noticed the child standing near him, maybe alone, perhaps a bit distracted, and he simply asked in a cordial, engaging way, “Say there, son, what all did your mama pack for you in that bag?” From such friendly inquiries are missions and ministries begun, and miracles born.

May the Lord Jesus Christ, the True God and Lover of Mankind, grant me the humility, endurance, and simplicity of Saint Andrew.  Saint Andrew, and all the saints, pray for us. 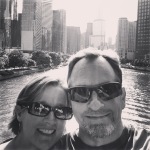 Dave is married to his best friend, Amy, and is dad to six kids ranging from college age to elementary school.  He puts bread on the table by practicing ophthalmology and doing cataract surgery.  He enjoys golf, but doesn’t play enough to have a decent handicap.  He is advancing through the belts of Tae-Kwon-Do with one of his sons.  He enjoys mosaic portraiture/iconography.

Christian background:  Dave’s Christian journey began with baptism as an infant in the United Methodist Church.  His primary spiritual influence was his mom.  From age six until after college, his church life was spent in non-denominational charismatic churches.  He attended Oral Roberts University, partly in hopes of figuring out what he believed and why he believed it.  Throughout his post college years, he and his wife journeyed within Evangelicalism from Pentecostalism to reformed Calvinism, with several stops in between.  The search for more answers accelerated whilst living in East Africa as medical missionaries, centering on the debate between Arminianism and Calvinism.  Soon thereafter, Dave had a friend unexpectedly convert to Roman Catholicism, forcing some further investigation.  Looking into the history of Christianity led to the study of Reformation history (the beginning of Christian history for him at the time), which then led to the “discovery” of the early church history and Patristic writers.  The ancient apostolic church evidenced itself through this history and the witness of the church Fathers.  After a long journey, and strong guidance from both Roman Catholic and Orthodox shepherds of souls, he, along with his wife and children, were received into the Orthodox Church in 2010.  They attend Holy Resurrection Orthodox Mission in Berrien Springs, Michigan.

The Immaculate Conception and Martin Luther