As a former resident of Paris and its suburbs, I have shared the grief and pain of the attacks on that beautiful city.  I have always loved Ernest Hemingway’s, now almost cliché quote, “If you are lucky enough to have lived in Paris as a young man, then wherever you go for the rest of your life it stays with you, for Paris is a moveable feast.”  My year living in the suburbs and commuting into the city for church and entertainment will forever be a watershed year.  It was the year that I first realized what it meant to be alone.  I had to navigate the harsh realities of being a stranger, speaking a strange tongue.  Yet, it was also the year that I returned to the faith of my youth.  When I was most alone and struggling, God was nearest to me.  In the urban wilderness of Paris, God met me and led me back to the country of my true citizenship, all while speaking a foreign tongue, swimming up stream in foreign customs.  I was no longer simply an American, nor was I really French.  God re-created me in my identity as a citizen of heaven.

My friends from across the political and theological spectrum continue to post and share their views on refugees and how support should look for the suffering of the world.  Is it okay to have a French flag on your profile picture?  Does that ignore the suffering of Beirut?  Is it the political duty of America to accept all refugees?  Is it the theological duty of a Christian nation to open the borders to all that come?  The problem I have with this “discussion” (if it can be called that) is that Facebook statuses and replies hardly constitutes nuanced discourse, which is necessary in the complex reality that we all live in.  For one thing, just because someone says this is as simple as a Biblical metaphor for an exile, does not make it true.  I’m not convinced that the Scriptures were given to us to teach us to how to establish borders, run governments, and navigate economic markets.  When a politician considers how an immigrant is to be viewed, they are not, nor should they, only consult an ancient theological text.  Politicians have to make decisions for people en masse, which does not relate to the moral injunction of Jesus, which says, “Whatever you have done to the least of these you have done unto me.”  While that is certainly an imperative that I should practice in my daily life, I do not believe that Matthew wrote it, or Jesus said it, because he imagined that the governor of Missouri was going to have to decide whether or not to accept Syrian refugees in 21st century America.

Here is a thought experiment: I wonder what it would look like if a Christian decided to go right into the middle of the conflict.  Christ calls us to “love our neighbor as ourself” right?  Does that mean that we love all people everywhere?  Augustine expounds it this way in On Christian Teaching, “Whence it follows, that he whose duty it would be in turn to help us is our neighbor.  For the name ‘neighbor’ is a relative one, and no one can be neighbor except to a neighbor.  And, again, who does not see that no exception is made of any one as a person to whom the offices of mercy may be denied when our Lord extends the rule even to our enemies?  ‘Love your enemies, do good to them that hate you.’”  In a sense, of course the command to love your neighbor as yourself implies all people.  But, Christ does not say it that way.  Why?  According to Augustine because neighbor is a relative term. We are to love the people that are closest to us.  This reminds of the story of Saint Francis meeting with the Sultan al-Kamil, the nephew of Saladin, right in the midst of the Crusades.  Francis decides to make the Sultan his neighbor so that he might show the love of Christ to him and try to stop the violence of the Crusades through Christ’s injunction to love our neighbor as ourself.  But, it had to be his neighbor. So, he went there.  This is madness to our modern minds!  Why would we go into the midst of the turmoil?  What about the safety of our Christian nation?  Everybody should just come here!  Come to our great homeland!  We will solve all your problems in an American way!  This is just another form ethnocentrism.

I must admit, that I wrote the above as a “thought experiment” because I am not ready to go to Syria or Iraq to make those people my neighbor to love them as Christ called me to love them.  I know of a man who did, Saeed Abedini.  I must admit, when I first heard his story, I thought, “Why should America help this man who just ran headlong into disaster?”  Saeed is a political prisoner in Iran.  He was formerly a Muslim Iranian who later converted to Christianity.  Feeling God’s call to return to Iran after a period in the United States, Saeed returned, leaving his wife and children in the U.S., while he went to share the love of Christ in Iran.  This man was not afraid of the difficulties he knew he would face.  2 Corinthians 5:18 says this, “All this is from God, who reconciled us to himself through Christ and gave us the ministry of reconciliation.”  Archbishop Desmond Tutu says that this is one of his favorite verses.  As Christians, we are agents of reconciliation.  We have been reconciled to God and we need to offer that reconciliation to the world.  Our primary citizenship remains not in a political territory of this world.  Our first thought should not be how to preserve this particular nation, or even worse, that the American way really is the “Christian” way.  It isn’t.  We are agents of reconciliation wherever we go because we can stand in the gap between peoples of varying allegiances.  We don’t need to put all our hope in the eroding structures of this temporary life.

While I lived in France, I was able to visit a monastery that changed my life, the ecumenical monastery at Taizé.  Frére Roger, who founded the monastery at Taizé, said this: “How can we offer reconciliation to the world if we cannot be reconciled to our brothers?”  What I learned from my time spent there in daily prayer with people from across the world, speaking multiple languages depending on who was sleeping in the bunk next to me, was that our first duty, my first duty is to love our neighbor wherever we are in the world.  We know that our citizenship is not on earth.  We are here, but for a time.  Our job is not to hold up national boundaries or borders or to think primarily like politicians.  Leave that to the professionals.  We can be grateful for what that provides, but our primary duty is to love our neighbor whoever or wherever that might be.  And, if you have a strong desire to love the refugees, may be the best way is to be a neighbor to them and love them where they are.  Not all of us can do that, but we can love the refugees that are already here, or maybe our neighbors who are already struggling with poverty right down the street.  Jesus call was to look right out our own back door and begin loving there.  Offering reconciliation to God and man because it has already been offered to us. 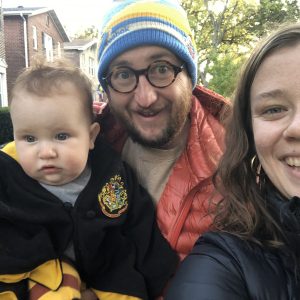 Myths of the Apocrypha - Part III