For the refugees of the Syrian crisis.

My infant daughter
doesn’t have
a word for thirst.
The words
she knows, we
make her say.

We require
what she has.
But when she
points, panicked
with need,
we relent.

Things were different
for Ephraim.
The Jordan ford
was watched–
there was no
deliberating.

To enter Gilead
was pass-fail.
When they
couldn’t say
the shibboleth,
they died for it.

In the book of Judges we are told that, after defeating the nation of Ephraim, the Gileadites stationed a watch at a crossing of the Jordan River to intercept those Ephraimites who attempted to cross back into the conquered territory.


And when any of the fugitives of E′phraim said, “Let me go over,” the men of Gilead said to him, “Are you an E′phraimite?” When he said, “No,” they said to him, “Then say Shibboleth,” and he said, “Sibboleth,” for he could not pronounce it right; then they seized him and slew him at the fords of the Jordan. And there fell at that time forty-two thousand of the E′phraimites.

I have always found this story darkly hilarious. The scene plays out in my mind: a mid-range shot of dark Middle Eastern men carrying their bundles across the water with garments hiked up around their thighs, wives and children following behind. Out from the bushes pops the guard. He jabbers in a foreign language. He is answered by a brief response. Hmm.

It is perfectly absurd.

Among our contemporaries, there is what seems to me a prim refusal to identify absurdity in anyone else’s actions or argument. It seems rude and uncharitable. And if it is suspicious to call absurdity absurd, then it is (ironically) damnable to call immorality immoral. But like logic and illogic, right and wrong are public, objective realities. Our intentions and understanding may determine our degree of culpability, but it is the thing itself that is either reasonable or not, good or not.

No one knows this better than the victimized, which is why the victim’s voice commands such a high premium: it is clarifying. A well-intentioned evil looks like any other to the one at the receiving end of injustice.

What relevance do the top-heavy deliberations of nations have for a child in his mother’s arms, weary and water-logged, fed for days on nothing but deprivation, watching his father negotiate their entry at the border? What does the father himself understand of this foreigner’s demands as he struggles for footing in the roiling river of language and culture that reduces the weak to children again, staring in supplication at grown-ups who determine where they go and what they get? He is hungry, he is homeless, he cannot go back to the land he came from. What more is there to say?

For me, absurdity offers a way to tie this biblical episode to the modern moral concerns we see descending from a nation above the Jordan–similar concerns of emigration, suspicion, and cultural difference. And so, I join my voice with Pope Francis in my moral judgment and my subsequent request:

It is unacceptable that so many defenseless persons – among them many small children – must pay the price for conflict – for the closure of the hearts and the want of a will for peace among the powerful.

Let us draw near to our Syrian brothers and sisters with prayer and solidarity. 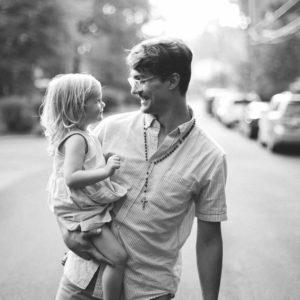 A Proposal for Approaching Theology Historically

Personhood Series: Introduction to the Relational Self