America is at war. Worldviews are clashing and the culture is divided. The rift penetrates even Christianity. Last week, Archbishop Wilton Gregory spoke out against recent actions of President Trump. Archbishop Carlo Maria Viganò then wrote a letter in support of President Trump. The left sees God on the side of justice, equality, systemic change, liberation, and progress. The right sees God on the side of law, order, hard work, family, morality, and traditional values. Whose side is God really on? Whose side are you on?

I fear that given the current state of society, Christians do indeed have to pick sides. However, I think the sides are not as they seem. I think that the left and the right, Democrats and Republicans, socialists and capitalists, CNN and Fox News, are largely on the same side, namely the side of advancing their own power and securing their own interests. Christians are deceived in thinking that the culture war is a battle of good against evil; it is more nearly a battle among evils. Christians have failed to recognize that the City of God is not the American City, let alone a faction within it.

When God became incarnate, Jesus did not pick sides in the Roman City. He sided fully neither with the Jews nor the Samaritans, the Pharisees nor the Sadducees. Christ chose a side that no one else even saw as an option. Christ chose the invisible side of the poor, the mourning, and the meek (Matthew 5:3-5). Christ taught that the Kingdom of God does not look like a political party or an Earthly kingdom, it looks like yeast mixed into flour, a remnant silently at work to transform the whole (Matthew 13:33). Christ taught that one would not see God’s side in the news, in the Temple, or on the Senate floor. Rather, followers would find the Kingdom of Heaven as one finds a buried treasure (Matthew 13:44), an unexpected bargain (Matthew 13:45), or something presumed forever lost (Luke 15). Christ taught his followers that the Kingdom is not something given at birth. The Kingdom must be sought (Matthew 6:33). Finally, Jesus taught that fighting for God’s Kingdom is nothing like winning an election, proving others wrong, exerting power, or advancing material interests. Joining the Kingdom has a cost (Luke 14:25-33). It requires repentance (Matthew 4:17) and rebirth (John 3:3). Being on God’s side means becoming a lowly servant; it could mean opposing and being hated by the whole world; it might even get you killed.

If Christians would seek first the Kingdom of God, rather than their own racial, class, financial, or political interests, the Church could certainly regain its sight and rediscover the invisible Kingdom that has come into, but is not of, this world (John 18:36). Joining this Kingdom, though, has its costs, and I fear they are costs many are unwilling to pay. Being a follower of Christ is not a convenient, compartmentalized, private, religious identity that can be added on to preexisting, public, political, economic, social, class, or racial identities. Being a follower of Christ means giving up who one was in order to incorporate Christ’s revelation at every level of one’s self and life. Being a follower of Christ requires persons to hold certain theological beliefs about the nature of the world, the value of human persons, and the purpose of life. These beliefs require new political, social, and economic views that lead to actions, which will radically conflict with all sides of self-interested worldly culture.

To join God’s Kingdom, American Christians must repent of being lukewarm (Revelation 3:14-22). They must repent of making a show of serving God, while really holding a portion back (Acts 5:1-11). They must repent because no one can serve two masters (Matthew 6:24). No one can serve God and their own interests in this world. Christian identity must transform one’s whole identity, which will lead one to work for the transformation of society. True followers of Christ, therefore, must step outside the endless power struggle of human history. They must renounce their citizenship in the American City, and they must let their own identities, power, desires, and self-interest be crucified. True followers of Christ must ask themselves: Are you on God’s side, or your own side? Are you on the side of the powerful and visible, or the meek and invisible? Are you willing to pay the costs of following Christ, or are you seeking easy rewards? Are you a part of the internal struggles of the Earthly Kingdom, or have you found and given up everything to bring the Kingdom of God on Earth as it is in Heaven? Whose side are you on? 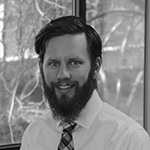 Luke Davis Townsend is an Assistant Professor of Theology at Marian University in Fond du Lac, WI. He holds a Ph.D. in Historical Theology from Saint Louis University, and an M.Div. from Vanderbilt University Divinity School. Luke grew up in the Southern Baptist Church, and often attended Methodist and Lutheran Churches with friends and family. After college, he worked as a youth minister in a Presbyterian Church. During graduate school, Luke took classes on St. Augustine and St. Thomas Aquinas. These thinkers led Luke to find a home in the Catholic Church, which he joined in 2015, and to write his doctoral dissertation on the sacramental theology of Thomas Aquinas. Luke currently lives in Fond du Lac with his wife Mary Frances and their dog Gus.

Who's Afraid of Trinity Sunday?