Reaching Out to Christ

“And there came a man named Jairus, who was a ruler of the synagogue. And falling at Jesus’ feet, he implored him to come to his house, for he had an only daughter, about twelve years of age, and she was dying.

As Jesus went, the people pressed around him. And there was a woman who had had a discharge of blood for twelve years, and though she had spent all her living on physicians, she could not be healed by anyone. She came up behind him and touched the fringe of his garment, and immediately her discharge of blood ceased. And Jesus said, “Who was it that touched me?” When all denied it, Peter said, “Master, the crowds surround you and are pressing in on you!” But Jesus said, “Someone touched me, for I perceive that power has gone out from me.” And when the woman saw that she was not hidden, she came trembling, and falling down before him declared in the presence of all the people why she had touched him, and how she had been immediately healed. And he said to her, “Daughter, your faith has made you well; go in peace.”

While he was still speaking, someone from the ruler’s house came and said, “Your daughter is dead; do not trouble the Teacher any more.” But Jesus on hearing this answered him, “Do not fear; only believe, and she will be well.” And when he came to the house, he allowed no one to enter with him, except Peter and John and James, and the father and mother of the child. And all were weeping and mourning for her, but he said, “Do not weep, for she is not dead but sleeping.” And they laughed at him, knowing that she was dead. But taking her by the hand he called, saying, “Child, arise.” And her spirit returned, and she got up at once. And he directed that something should be given her to eat. And her parents were amazed, but he charged them to tell no one what had happened.” Luke 8: 41-56

This Gospel is a good reminder to us of spiritual truths that we tend to forget in the course of our lives and day-to-day activities. And as in all spiritual truths, when we forget them, our souls suffer.

The first part of this Gospel is about Jairus, whose twelve year-old daughter is dying. Jairus was a leader in the synagogue. He was pious, respected, and he kept the commandments.

He comes to Jesus in desperation, he loves his daughter. He asks Jesus if He would come to his house and heal her. There is a big crowd of people that forms around Jesus and the crowd moves as Jesus moves. In that crowd is a hidden woman. Everybody knew Jairus and everyone knew how important he was. But this woman was different, she was quiet and meek, she was hidden. She had been sick for a long time. She had tried all the doctors and all the cures. She was an outcast because of her condition. She reaches out to touch Jesus. She knows that just by touching the hem of His garment she will be healed. She knows that this is the Messiah. Power goes out of Jesus and she is immediately healed. Then Jesus says, “Who touched me?” She is found out brought forward and Jesus says, “Woman your faith has made you well, be of good cheer, go in peace”

About this time the crowd reaches Jairus’s house. Outside are paid mourners and family. It’s a big deal because he was an important man. Jesus tells them all to leave. He allows only mom dad and His three disciples to go in. He says “little girl arise” and she is raised from the dead.

Why are these two stories together?

Jairus is a type of all the Old Testament believers who kept the law of God as best they could. His daughter is twelve years old. The number of tribes of Israel. The faithful of the Old Testament have worked hard to keep the law of God, but sickness and death are still too strong. So Jairus comes to Jesus and says we can’t do it Lord we have tried we’ve done the best we can. But we cannot do it by ourselves. We need your presence if we are to have victory over sin and death. Please come to my house. The woman Veronica is an image of the New Testament. Jesus came to heal sick souls, and we approach Him in Humility and faith.

The lesson of this Gospel is that we can never rely on ourselves. Often we talk about what we are supposed to do. We are supposed to fast to pray to love; we are supposed to put on Christ. All of these guidelines are good and necessary. They teach us how to live. But sometimes we begin to think that every thing depends on us. We can be filled with pride thinking we are doing OK or we can be filled with despair thinking we can never do anything. We need to remember that unless Christ is dwelling in our hearts we can do nothing.

“Without Me you can do nothing” (John 15:5) and “I can do all things through Christ who strengthens me” (Phil. 4:13) Without Christ all our efforts are worthless.

Veronica has been to every doctor and tried every possible cure. She is healed only when she reaches out to Christ.

Jairus could not defeat sin and death with the law of the Old Testament, only by inviting Jesus into his house. Veronica was not healed by faith in the things of this world but only by faith in Christ.

Healing power flows from Christ. But Christ is beyond our comprehension, He does not always heal in the way we think He will.

We are designed as sacramental beings. We have souls and our souls acquire the things that we provide for it whether good or bad. We believe that we become partakers of the divine nature in the Eucharist, we believe that when we are baptized that we die are buried, and are raised to walk a new life, putting on Christ every day. When we are married, we believe that in a mystery two souls are transformed into one.

We use physical things in the Orthodox Church because in the context of faith and prayer, the power of Christ works through them. There is no power in the paint or the wood of an icon, there is no power in oil or water if Christ is not present by our faith. To touch the hem of His garment in faith was to touch Him. Lots of people were touching Him, but Veronica’s faith draws His power through the Hem of His garment.

The spiritual life has two parts the part we do and the part God has already done and actively provides.

The victory is Christ’s. We tend to think that we have a spiritual side of life, vs physical side of life (there is only one life) all the time we are saying Lord come into my house Lord take up your dwelling in my soul, Lord give me victory over my sins, because I cannot win this war with my own strength. As we reach out to Him in faith we say, you are the victor you are my salvation, you are my healing and my strength.

Let us make Jesus the very center of our existence. With every beat of our hearts say His name. With every breath, when we inhale say Lord Jesus Christ son of God, and when we exhale have mercy on me a sinner.

We know the victory is ours. The final victory will come in a moment in the twinkling of an eye. The victory will be complete on the last day when Jesus says to us “ARISE” Then we will be truly healed.

Traditionally, Veronica came to believe in Christ when He healed her of an ailment that had afflicted her for twelve years:

And, behold, a woman, which was diseased with an issue of blood twelve years, came behind him, and

touched the hem of his garment:

For she said within herself, If I may but touch his garment, I shall be whole.

But Jesus turned him about, and when he saw her, he said, Daughter, be of good comfort; thy faith hath made thee whole.

And the woman was made whole from that hour.

The next episode that we hear of in her life is the famous cloth incident during Christ’s crucifixion. When Christ paused in exhaustion, Veronica was able to give the Lord her handkerchief. When she looked at the cloth again, she realized that an image of Christ’s face had appeared on it; this is often called the first icon. Veronica’s name itself is said to be derived from the Latin words meaning true (verus) image/icon .

No one is certain of what happened to Veronica in her later years, though one story has it that she cured the Roman Emperor Tiberius of some kind of sickness using her iconic cloth. Some sources say that she and her husband, named Zacchaeus, travelled all the way to Southern France confessing the Gospel.

Information on Veronica from Orthodox Wiki 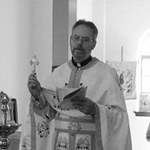 Fr. Gregory is the priest of a small, canonical Orthodox Mission in Berrien Springs, MI. Ordained as a priest in 2007, he desires to use his position as a priest to see souls healed through the life in Christ as prescribed by the Orthodox Church.

Empiricism, You’ve Got Some ‘Splaining to Do

Round Table: Image of God

Reaching Out to Christ