Scandalous Sacredness: A Note from the Chaplain Chronicles

I spent a little over a year in a Clinical Pastoral Education program as a Chaplain Resident at a major hospital in North Carolina. Throughout my tenure there my most difficult and emotionally rupturing visits concerned the end-of-life of young parents with teenage children or younger. My parents were monumental to getting through my teenage years. We were close. My confidence, esteem, personality quirks, and idiosyncrasies (although I hesitate to admit it) would probably not be so beneficial to me without both of my parents guiding me and encouraging these traits within me. Looking back now, I realize that I needed them. Even more so, I can’t imagine life without them now. My heart was always more sensitive than I desired for calls like this.

As I arrived on the unit, a nurse gestured for my attention and we walked around the corner to speak privately. She told me that her patient, Katie, is a young mother with 2 children: a 17 year-old daughter, Kristin, and a 12 year-old son, Kyle. Until very recently, the family was telling Kristin and Kyle that their mother would be okay and get better. I was called just as their family attempted to ease them into what was actually happening with their mom, namely, that she was dying and sooner than they anticipated. Katie was in a freak accident; a car rolled silently down a steep driveway, hit her, and dragged her several feet. She suffered a traumatic brain injury. After several scans, a team of neurologists surveyed that her brain scans were almost silent. The social worker on the unit informed me that Katie’s husband, Chris, was on a “touch-n-go basis”; he could not handle the news from doctors. In addition to unfavorable medical updates I learned that Katie’s parents and her husband, Chris, were not on speaking terms. The charge nurse and social worker mutually agreed that the worst-case scenario was for the children to come see their mom that same day, in the midst of the family’s tense dynamics, and surely enough they came.

I spent a little under an hour with 3 teenage girls and a family friend who was a cardiac nurse. All three of these girls were the best of friends and had grown up together. In a sense, they were still growing up. These girls were Katie’s daughter and two of her best friends, one having had open-heart surgery as a pre-teen. While this visit was by far one of the toughest, it was saturated in sacredness. I wouldn’t gauge the quality of our time together by the amount of laughs exchanged (which happened), nor the amount of time they granted me to be with them; however, those girls welcomed me, a Chaplain, to be with their mother and aunt in a situation new to all of them. Their feelings proved elusive to capturing with words. I asked if they were religious in any sense, if they have a faith tradition or consider themselves spiritual. Kristin admitted that she doesn’t go to church like that; it never was a very regular part of their Sundays. Sundays were Mom-days. To which I responded, “I asked because I wanted to know if a prayer would be helpful.” All of the girls figured it would, and then I discovered the power of asking questions. “What are some of the names your mom goes by besides mom?” Smiles began to creep across the room as they voiced her many nicknames and the stories associated with them. I asked Kristin what she would like me to pray with her about and she said: “For my mom to get better and come home.” That moment shifted everything. Kristin knew the prognosis. So I prayed.

I voiced the concerns and feelings I knew I would have if my mother were lying in a hospital bed dying. I lifted the beauty of memories, of friends, of family, love, and the warmth of her mother’s hand as her daughter held onto it and cried. Each of those girls was very much teary-eyed and sniffling; however, it wasn’t the eloquence of the words or the articulation of their pain that moved them to tears. Someone listened to their hearts and voices and said in prayer what they could not muster or were too pain-filled to put to words. For those teenage girls I felt like a conduit, and for the first time in that hospital I prayed a genuine prayer of lament. I did not leave the prayer at lament, yet I didn’t leave it in celebration. I left it where it began, with a mother, her daughter, and her daughter’s three friends. It seemed as if all she had in that moment was God in the faces of her 3 friends who did not utter a word and who would not leave her side.

At the time, I wasn’t really convinced that showing up is doing something. I’m a bit old school; if you show up, you had better be doing something. Presence as I understood it at the time was merely being there. However, in merely being there I witnessed and I testified before God what I witnessed. The ministry of presence is not just showing up, it is being there, and in being I found that I was doing something. It is not being a bystander. Bystanders don’t do too much. Witnesses on the other hand do. Those teenagers invited me to paint their pain with words, listen to the cadence of their hearts and peek into the depths of what they could not voice. I prayed as a witness to their realities. Upon saying amen, I heard much sniffing, many tissues being passed, and saw many long hugs. I hoped to let them know that their feelings were valid before they could begin to scrutinize them—that is sacred.  I may have preached in that prayer, but it certainly wasn’t to the girls. I preached to God and God listened—lament.

None of us are immune to tragedy. Life will collapse; our worlds will tumble down. Perhaps life couldn’t be a complete life without the tragic. Maybe it’s even built into the structures of creation. To say that beauty outweighs the tragic is your own call to make. No one can make that call for you. But my hope for you is this:I hope love never fails you. I hope it always finds a way to strengthen you. I hope it seeps into the cracks and depths of your life and envelops more dimensions of your reality than you would be comfortable to admit.

In the midst of 3 friends surrounding the ICU bed of a dying young mother, the scandal of sacredness saturated the scene. A child’s unspeakable hurt churned her soul rising as tears hallowed by palpable pain, which fell on the body of the woman who had carried her. A child —who felt her mother’s warmth and pulsed with the feel of her voice before she could hear it —anointed her mother with love she could not return. Love’s power for life can transform you in ways the tragic can’t touch. We cannot escape the tragic, but the tragic cannot escape love’s power. This daughter standing over her mother testified that love must last both within and outside the boundaries of time. 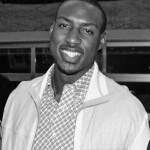 Larry J. Brown, Jr. was born & raised in the city of Jacksonville, Florida. He is currently a PhD student in Clinical Psychology at Howard University. Larry is a graduate of the Wake Forest University School of Divinity (2015) and holds a BA in English Literature & Psychology from Florida International University (2012). He is an avid gamer, reader, anime fan, and enjoys exploring life, God, and everything in between. Larry is an ordained Baptist minister.

Scandalous Sacredness: A Note from the Chaplain Chronicles