Is Sprinkling the Best Way to Baptize?

Here in the Bible Belt, sacramental Christians sometimes feel like the nerdy kid on the playground when it comes to explaining our practices of baptism.  In many Baptist, Pentecostal, and nondenominational congregations, baptism is only done “as John the Baptist did it.” That means getting dunked like an early morning cruller in hot coffee. For many in my part of the world, baptism means one thing: immersion.

United Methodists actually aren’t against immersion (which is a common misconception).  We are people of the via media after all, and we simply recognize that God’s grace, rather than the amount of water, is the most important agent of baptism.  Our official church teaching on baptism states:

In United Methodist tradition, the water of baptism may be administered by sprinkling, pouring, or immersion. However it is administered, water should be utilized with enough generosity to enhance our appreciation of its symbolic meanings.

A “generosity” of water is encouraged not because it makes the baptism more legitimate, but because it suggests symbolically what we proclaim in the liturgy: that God’s grace is abundant, free, and there is plenty to go around.  Thus, even when sprinkling, I will pour a large amount of water into the font, as noisily as possible.  I run my hands through the water for emphasis.  Sacraments rely on the reality of the Incarnation, after all, and are best experienced through as many senses as possible.  But the effectiveness of the sacrament does not rely on getting as much of that water onto the newly-minted Christian as possible.  In fact, God seems to relish in working powerfully through the small, the inferior, the minute, and the insufficient.  Consider:

God, it seems, can do a lot with a little.

Hence the logic of baptism by sprinkling.  Because it is water that has been touched by the Spirit which hovered over the waters at creation and over the Jordan at Jesus’ baptism as a dove, the amount is irrelevant.  Just a few drops are enough to make a Christian.  For Hebrew men, all that separated them from the covenant community was a little bit of skin.  For us, it is a little bit of water and some prayers.

We live in a consumer culture that constantly stresses more, and larger, and greater.  Why get the V-6 when the V-8 goes so much faster?  Surely you need the 50″ flatscreen because your 46″ has already become boring and your neighbors have a 56″!  Why settle for a standard cheeseburger when you can get two or three patties?

In such a world, I can think of few better witnesses to the Kingdom of God than making a new Christian with just a few drops of water.  By sprinkling, the pilgrim church on earth dares to say that death and resurrection, new birth, and covenant identity in Christ Jesus can all be granted by the smallest of gifts from God’s abundant storehouse of grace.

Just a few droplets leave an indelible mark that cannot be removed.  Luther points out the power of sprinkled grace in his Large Catechism:

Therefore our Baptism abides forever; and even though some one should fall from it and sin, nevertheless we always have access thereto, that we may again subdue the old man.  But we need not again be sprinkled with water; for though we were put under the water a hundred times, it would nevertheless be only one Baptism, although the operation and signification continue and remain.

St. Paul told us, in his first letter to the church at Corinth, that “faith, hope, and love abide” but “the greatest of these is love.” (1 Cor. 13:13)  One of the chief ways that these three—and chiefly God’s love—abide in us throughout our lives is by the gift of baptism.

This piece first appeared on Via Media Methodists. 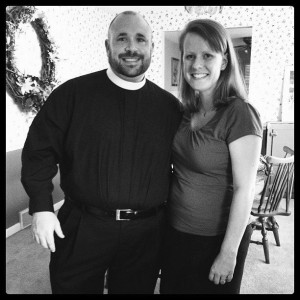 The Rev. Drew McIntyre is an Elder in the Western North Carolina Conference and serves West Bend UMC in Asheboro, NC. Born and raised in the Tar Heel state, he was educated at High Point University (B.A. History, B.A. Religion) and Duke Divinity School (M.Div., Certificate in Gender, Theology, & Ministry). Drew enjoys spending time with his wife, Brittany, playing with their pets, reading, and watching movies. He is avid fan of mixed martial arts and Duke basketball, and also blogs at DrewBMcIntyre.com. Follow him on twitter @drewbmcintyre.

Is Sprinkling the Best Way to Baptize?